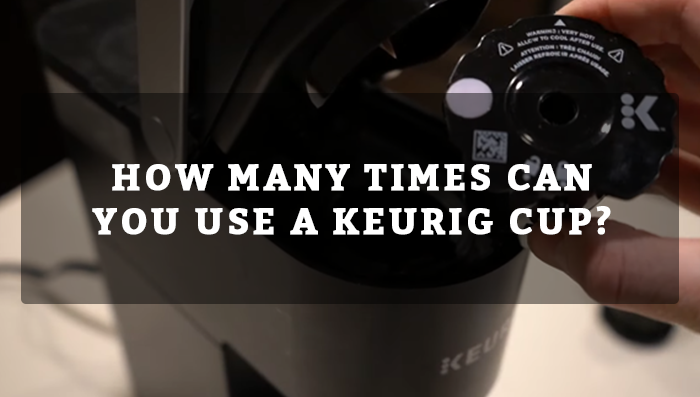 K-Cups are made only to be used once before being discarded. But if you want to opt for making your K-cup be used twice, you can use My K-Cup Universal Reusable Filter.

K-cups, which basically contain sealed coffee grounds, has modernised the way today we make coffee which is easier in terms of saving time. However, with time people are really coming up with their concerns about using this plastic  K-cup as a yay or nay.

We are gonna solve the mystery to cater to all the right concerns you have about the Keurig Cup.

Using A K-cup More Than Once Is A Big Deal?

The first thing that you might be familiar with is the recommendations stated by the Keurig manufacturers not to use the K-cup twice because it could result in an inferior or bitter flavour of brewed coffee. So a bad cup can make you feel like it’s a big deal.

The basic saying is that a K-cup is a single coffee server, so it can’t be used twice. The type of coffee in each K-Cup has an automatic detection and adjustment pod brewing system, so if an already punctured pod is placed in the machine, it won’t be able to detect and brew a coffee using it.

The way for this is to use a reusable K-cup filter to which you can add your favourite coffee grounds of any type and place it simply in the brew head. The primary concern lies here is that it can leave the coffee grounds in your cup, or it can also clog your machine.

Also, consider the fact that you need to get the k-cup according to the model you are using. Because K-cups Reusable Filters come in two different designs.

The old model follows the one-needle system and can’t be used in the latest Keurig models like K-supreme. However, the new K-cup with five needle system is more suitable for the latest models.

Fun Fact:
If you tried to switch that up and used the new K-cup in the old Keurig machine it can lead up to leakage in your brew head, so this could be a mess!

Hence, if you have a single-point system in your coffee machine like older models, you can stick to the older My K-cup reusable coffee filter, and if you have a new model Keurig machine, you should prefer the latest, My K-cup filter model.

How Does A K-cup Work?

The K-cup brews a coffee by simply putting it into the brew head of your machine and it will automatically get pierced by Keurig needles and detected by the machine to adjust parameters of coffee like temperature and water to achieve the type the beans got originated from.

Using K-cups Twice Can Affect My Coffee or Not?

Using K-cups twice can only not affect your coffee but your morning and certainly the whole day too.

If we actually look deeper, we can make sense of the fact that using the K-pod once the coffee grounds are already used so, if you brew it again, the intensity of flavor would be reduced and will give you a more watery coffee than a real one you have in the first place.

People arguing that it tastes good are the ones who are more inclined towards weak coffee or don’t care if it’s watery or not!

Further, using a k-cup twice can give you browny water, so be aware of that.

It might also give you leftover coffee grounds at the bottom of your cup because the filter in the cup might not be working properly due to the usage.

Another problem could be a clogged machine as the coffee grounds can get stuck in your already uncleaned machine and that could be really concerning.

Can you double-brew coffee in Keurig?

Yes, you can trick the machine into brewing the coffee twice the second the first brew cycle ends. But its flavour depends upon the intensity of the pod you are using. If you are brewing an 8-10 oz coffee pod twice, the taste will be better instead of using a 6oz pod again.

It also depends upon your preference and taste in the end. If you like intense coffees this option might not be the best for you. But if you are in the middle of light to intense coffee, you can have a nice and bigger cup of coffee by performing a double-brew.

You just need to get your K-cup reusable filter and your machine and your ready to follow the steps:

And that’s how you do it!

First of all cleaning, a reusable K-cup can be a little messy because if you’re thinking of throwing the coffee grounds into the sink, it can get stuck in the drainage pipes. So, we have to figure a way out.

Before Starting out with the cleaning process, you need to get a small container and a coffee mesh filter to get the small coffee grounds while washing your K-cup filter.

If you are prepared follow the steps in order:

And now you can use your K-cup reusable filter again.

What Kind Of Coffee Do You Use In A Reusable K-Cup?

There are no restrictions on which coffee you should go for as it’s totally upon your preference. The only thing that matters about the coffee grounds are the number of proportions you add into the K-cup reusable filter that is to the max line.

So technically, you have the freedom to make your own choice and try any flavour or coffee you want.

How Long Do Reusable K-Cups Last?

You can use a Reusable K-cup 20 times. However, in the end, it really depends on how vigorously you use it.  Taking care of the K-cup filter while keeping it clean and increasing the lifespan of your K-cup reusable filter.

How To Reuse A K-cup Twice?

You can re-use a K-cup twice, but you have to do it fast right after the first brew cycle.

First as discussed above, you need to get a dark roasted coffee flavour with at least 10 oz of coffee in it so that the coffee brewed in the second cycle will have a taste but less intense than the first cycle.

Secondly, use a smaller size cup option so that it won’t be watery enough and still get the original coffee ground flavour the pod had. However, it’s totally your preference on the type of coffee you want, so it’s totally up to you too.

Keep in mind that you can’t leave the pod for a second brew for a longer time as mould can grow on it, and it’ll taste bitter.

K-Cups are the most practical way to brew coffee nowadays, as all of us can’t draw to switch back in time to follow a traditional method of brewing coffee.

But unfortunately, K-Cups are made for one use only and are incredibly wasteful. We advise getting a reusable K-Cup filter basket if you’re seeking a method to reduce waste without giving up the convenience of your K-Cup brewer.

With a reusable K-Cup filter, you can make coffee quickly and conveniently while reducing waste, giving you the best of both worlds. Make sure to clean it regularly so that it can stay with you for a longer period of time.

Additionally, permanent K-Cup filters enable you to use any type of coffee, so you aren’t restricted to simply purchasing products from companies that make their own K-Cups.

Which Keurig makes the biggest cup of coffee?

The largest cup of coffee Keurig makes is 10oz.

Can you double-brew coffee in a Keurig?

Yes, you can double-brew the coffee in a Keurig. It’s your preference. If you like a watery coffee, you can do it with a lighter intense pod, and if you are a bold coffee person, you can opt for an intense coffee flavour so that it would have the original flavour in the second brew.

Nabiha was looking for a blog as a university student where she could express her viewpoint on her favourite coffee beverages. Visuals were first her interest because of her experience in the arts and culture, but coffee quickly took that place!
Nabiha's preferred coffees are delicate, flavorful, and sweet. However, she is equally drawn to large, eccentric, fruit-forward coffees. Like any cancer, just don't ask Nabiha what to choose from her favorites!