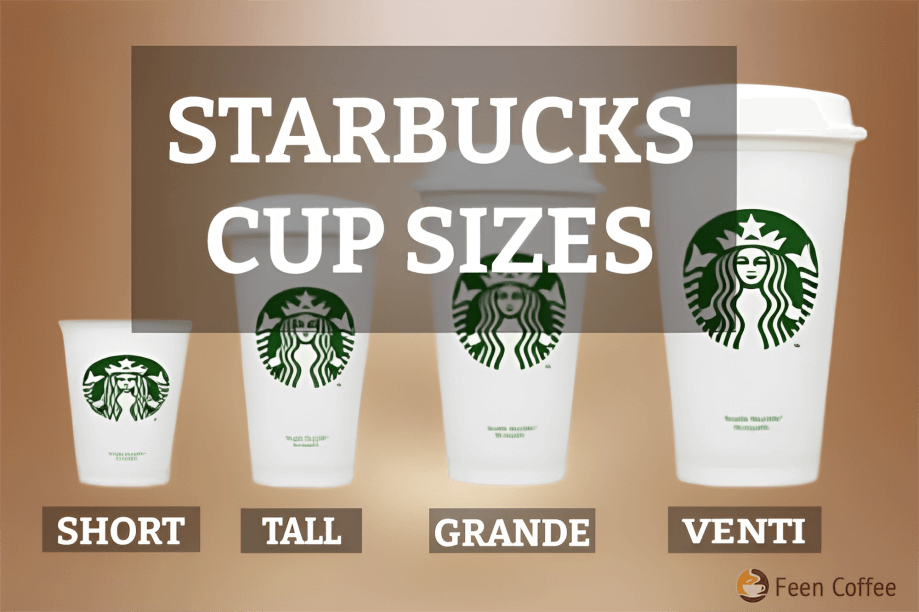 Starbucks is one of the biggest coffeehouse chains in the world and is currently operating in 80 countries with 30000 locations worldwide. Undoubtedly this coffee mega-chain has affected the coffee world and coffee drinkers in many ways. It started in Seattle in 1960,s and in the next two decades, it spread like wildfire. It is hard to fathom a world without Starbucks. This larger-than-life brand started as a coffee bean distributor by 3 friends Gordon Bowker, Zev Siegl & Jerry Baldwin. Later on, Howard Schultz bought it and turned it into the behemoth it is today.

How did the names of Starbucks cup sizes come into existence?

This is one of the most frequently asked questions. How did the sizing options of Starbucks come into existence? Well, the secret is out. Howard Schultz was always looking for ideas to set Il Giornale apart. He wanted to give it a more exotic experience. When he went to Italy in 1986 he was captivated by the awe-inspiring coffee culture. So he brought back many ideas including the Italian size naming style.

After acquiring Starbucks. he merged Il Giornale into it and thus the new names took over. For several years, Starbucks only had three serving sizes Short, Tall & Grande but they had to introduce new sizes to cater to customers who had more caffeine requirements. Now Starbucks has 6 serving sizes starting from Demi being the smallest to Trenta being the largest.


Starbucks being a coastal brand has been inspired by many nautical literature and myths as well. The name “Starbucks” was taken from the famous novel “Moby Dick”. Starbuck was the name of the first mate.

Getting confused between different sizes at Starbucks? Don’t worry! This happens to most of us except Italians. But all this confusion has led you to this article and now you’ll be able to understand the sizing options better. There are six cup sizes at Starbucks Demi, Short, Tall, Grande, Venti & Trenta.

This is the smallest size on the Starbucks menu and is only used for serving hot drinks like Espresso shots or Macchiatos. It is a 3fl oz (88 ml) cup. The name is derived from the French word “Demitasse” which means “half cup” in French.

This cup houses 8fl oz of any hot drink of your choice. Starbucks does not serve any cold drink in such a small portion at the moment Although this size is a bit underappreciated these days as the sizes have grown you can still order your favorite drink in a smaller portion when desired. Short is the Starbucks variant of small and contains only one shot of espresso for almost all drinks except flat whites.

Starbucks’ depiction of regular or medium size is a tall cup. It can contain 12fl oz of any desired drink. Most tall drinks of Starbucks have only one espresso shot but another can be added on demand. Starbucks serves both hot and cold beverages in its tall sizing, unlike short cups which are only for hot drinks.


Both short and tall sizes have the same amount of espresso shots in them. So if you are ordering the tall size for the sake of a harder drink, you might want to add another shot of espresso to it.

Grande means large in the Starbucks world. When you order a Grande at Starbucks you get 16fl oz of coffee. A Grande always has two shots of espresso in it. Starbucks serves both hot and cold drinks in this cup. So you can enjoy a variety of drinks in this size. It’s Starbucks’ highest-selling size. The size of a normal Grande is almost equal to two regular-sized coffees at any normal coffeehouse. This was the largest sizing option on the Starbucks menu until the Venti was introduced.

This is Starbucks’ large sizing option and can be used for both cold and hot drinks. “Venti” means “twenty” in Italian. So understandably the Venti cup houses 20fl oz of any hot drink off the menu. But in the case of cold drinks, the serving size is 24fl oz as Starbucks adds an extra 4fl oz to make up for the ice that is added in the cold drinks. This is the largest sizing option for hot drinks on the Starbucks menu and has two shots of Espresso.


If you want a smaller drink in a larger cup size you can always ask your barista to do so.

This is the size that is only available for a handful of cold drinks and no espresso-based drinks are served in this size. It is mostly used for Iced teas and coffees. Another thing to remember is that this size might not be available in some Starbucks. Trenta means “thirty” in Italian and this size contains almost 31fl oz of any drink that is available in this size.

These are the sizing options that are available in all Starbucks at the moment. Now let’s move further to some frequently asked questions about the Starbucks cup sizes.


The character in the Starbucks logo is not a split-tailed mermaid? But rather it’s a Siren, a mythical creature known for luring sailors into the water. Starbucks wanted its coffee to have the same effect. Hence the choice of the logo.

Is Venti the largest cup size for hot drinks at Starbucks?

The answer is Yes. Venti is the largest cup size that Starbucks serves. It contains 20fl oz of the drink of your choice and the caffeine concentration can be increased by increasing the number of espresso shots.

Is the Starbucks Tall size equal to a regular coffee cup?

No, regular coffee cups contain only about 8fl oz of coffee. But, Starbucks tall contains 12floz of coffee, which makes about one and a half cups of coffee. Starbucks “short” cups are equal to regular-sized coffee cups.

What is the largest Starbucks cup size?

The largest Starbucks cup for hot & cold drinks is the “venti” which is about 20fl oz for hot and 24fl oz for cold. But you can get some cold drinks in the Trenta size as well. This size contains about 30fl oz.

How many pumps of syrup are there in each cup size?

The short, grande, and venti have two pumps of syrups each while tall, venti (cold), and Trenta have three pumps.

We all have caffeine cravings and Starbucks is a great option to get your daily fix of caffeine. Although the Starbucks menu can be a bit tricky in the beginning, we hope this article will help you navigate your way easily.

You have the baristas at your disposal as well, and if you feel the need you can ask them to customize the coffee according to your taste. So what’s stopping you now? Go get your cup of Joe confidently. Cheerios folks! Keep slurping.

Asher Daud has been a coffee enthusiast since childhood. He loves trying new coffees to widen the horizons of his tastebuds and elaborating and communicating his experiences to readers worldwide through his writing skills. From off-the-rack coffees to hand-grinded Kopi Luwak, he is on a journey to try them all and share his insights with you. During his free time, he likes visiting new cafes and talking to baristas to soak in all the knowledge he can to give his readers all the information he can straight from the maestros.